Kyiv: Russian forces escalated their attacks on crowded urban areas Tuesday in what Ukraine’s leader called a blatant campaign of terror, while US President Joe Biden vowed to make his Russian counterpart “pay a price” for the invasion.

“Nobody will forgive. Nobody will forget,” Ukraine’s President Volodymyr Zelenskyy vowed after the bloodshed on the central square in Kharkiv, the country’s second-largest city, and the bombing of a TV tower in the capital.

The United States closed its airspace to Russian planes, days after European allies did it.

As Biden spoke, a 40-mile (64-kilometer) convoy of hundreds of Russian tanks and other vehicles advanced slowly on Kyiv, the capital city of nearly 3 million people, in what the West feared was a bid by Putin to topple the government and install a Kremlin-friendly regime. 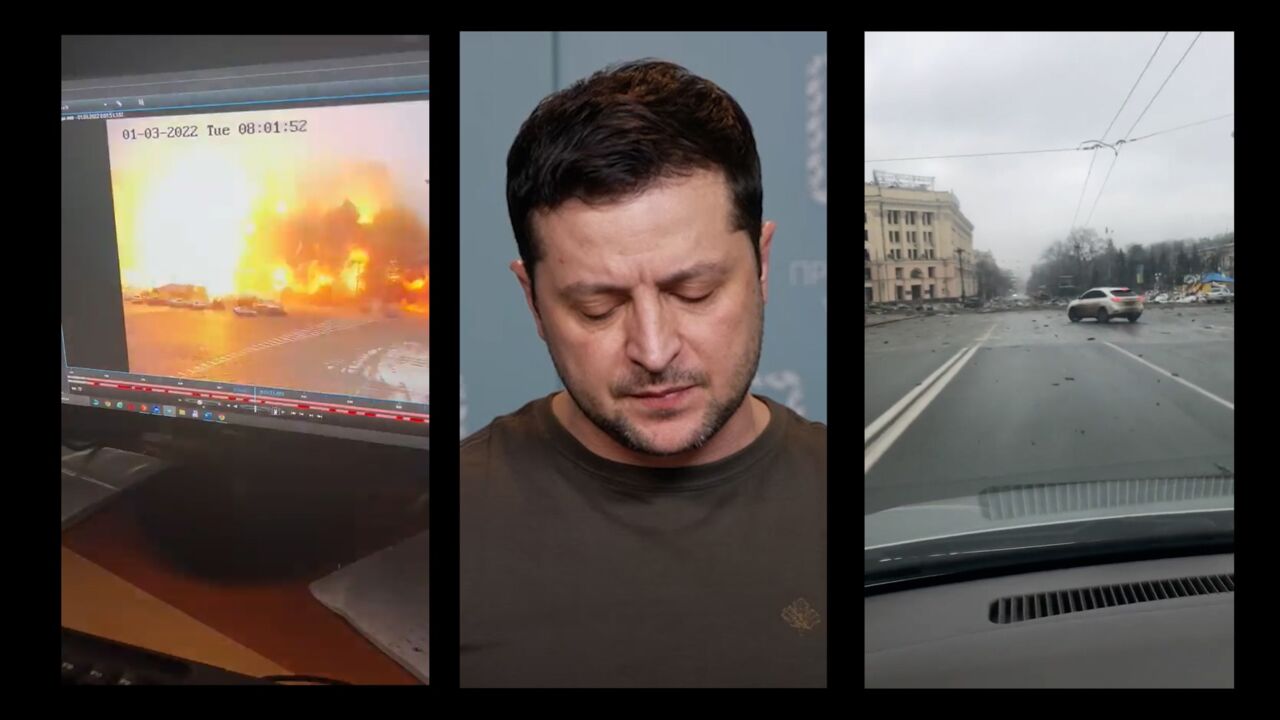 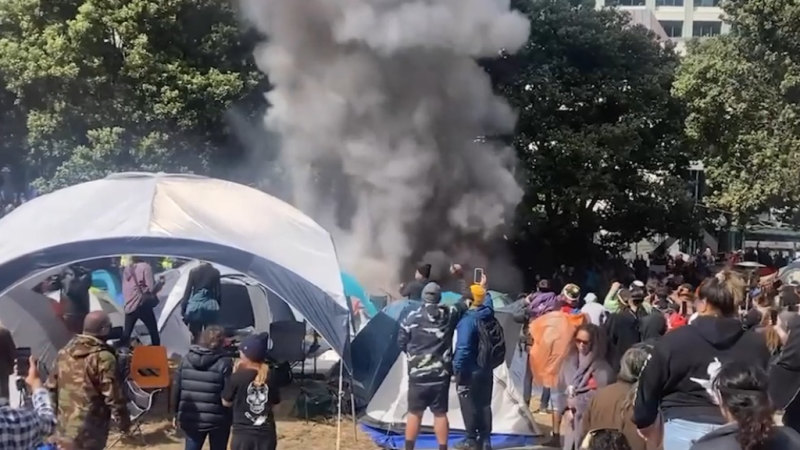 An assault by Russian forces on Kharkiv, Ukraine led to a huge missile strike that narrowly missed a government building, as president Volodymyr Zelensky strongly condemned the “murder of innocent people”.

The invading forces also pressed their assault on other towns and cities, including the strategic ports of Odesa and Mariupol in the south.

Kyiv’s mayor published a video showing the moment when a TV antennae in the city was engulfed in flames, apparently hit by a rocket, killing five people. Earlier, Russia’s defence ministry said it would strike communications sites in Kyiv it said were being used for “information attacks”, TASS news agency reported.

Day 6 of the biggest ground war in Europe since World War II found Russia increasingly isolated, beset by the sanctions that have thrown its economy into turmoil and left the country practically friendless, apart from a few nations like China, Belarus and North Korea.

As the fighting in Ukraine raged, the death toll remained unclear. One senior Western intelligence official estimated that more than 5000 Russian soldiers had been captured or killed. Ukraine gave no overall estimate of troop losses.

The UN human rights office said it has recorded 136 civilian deaths. The real toll is believed to be far higher.

Nearly a week since Russian troops poured over the border, they have not captured a single major Ukrainian city after running into far fiercer resistance than they expected.

Michael Kofman, an expert on the Russian military at Washington DC’s Wilson Center, tweeted: “Looking at the Russian operation so far, they’re having tremendous problems with logistics and communications. The whole effort seems shambolic.”

Many Western military analysts fear that Russia will now fall back on tactics which call for crushing bombardment of built-up areas before trying to enter them.

A US official, speaking on condition of anonymity, said: “One reason why things appear to be stalled north of Kyiv is that the Russians themselves are regrouping and rethinking and trying to adjust to the challenges that they’ve had.”

The Russians have been surprised not only by the scale of Ukrainian resistance but also by poor morale among their own forces, some of whom surrendered without a fight, the US official said.

Russia still has more forces to throw into the fight even though President Vladimir Putin has drawn global condemnation and sanctions that have already sent the rouble into freefall and forced Russians to queue outside banks for their savings.

Russia’s TASS news agency reported new peace talks would be held on Wednesday. A first round of talks between Russian and Ukrainian officials on Monday at the Belarus border failed to reach a breakthrough.

Russia sees “no desire on the part of Ukraine” to try to find a legitimate and balanced solution to the problems between the two countries, Gennady Gatilov, the Russian ambassador to the United Nations in Geneva, told Lebanese television in an interview aired on Tuesday.

American big brands including Apple, Google, Ford and Harley-Davidson stopped sales and distanced themselves from Russia because of the invasion of Ukraine, joining a growing list of companies from shippers to car makers to energy companies shunning the country.

Apple said it had stopped sales of iPhones and other products in Russia, Alphabet’s Google dropped Russian state publishers from its news, Ford Motor told its Russian manufacturing partner it was suspending operations in the country, and Harley-Davidson Inc suspended its business and shipments of its bikes.

Gatilov said Russia “supports diplomacy based on respect for the positions of all countries and equality, but for now we don’t see that”, the Russian news agency RIA quoted him as saying in the interview.

Ukrainian Foreign Minister Dmytro Kuleba said Kyiv was ready to talk but would not bow to Russian ultimatums.

In the south of Ukraine, Russia claimed to have completely encircled Ukraine’s Azov Sea coast. If confirmed, that would mean Russian forces invading from Crimea had joined up with separatists in the east and had cut off Ukraine’s main eastern port, Mariupol.

Some Kyiv residents have been sheltering in underground metro stations at night. There are long lines for fuel and some products are running out in shops, but by day there is a semblance of ordinary life on the streets.

In an emotional address to the European Parliament by video link on Tuesday, a day after he signed an official request to join the European Union, Zelensky urged the bloc to prove that it sided with Ukraine.

Foreign Minister Sergei Lavrov told a Geneva disarmament meeting via video link that Ukraine had been seeking nuclear weapons. More than 100 diplomats walked out of the hall in protest as his speech began.

In an intelligence update, Britain’s defence ministry said a shift in Russian tactics puts civilians in danger: “The use of heavy artillery in densely populated urban areas greatly increases the risk of civilian casualties.”

Human rights groups and Ukraine’s ambassador to the US have accused Russia of using cluster bombs and vacuum bombs, weapons condemned by many organisations.

Ukraine’s general staff said Russian losses included 5,710 personnel, 29 destroyed and damaged aircraft and 198 tanks, all figures that could not be verified. Russia has given no full account of its battlefield losses.

Zelensky also said he spoke to US President Joe Biden on Tuesday about US leadership on sanctions against Russia and defence assistance to Ukraine.

“We must stop the aggressor as soon as possible. Thank you for your support!,” he said on Twitter.

A worker at a Ukrainian gas station in Volovets, western Ukraine. The war is raising huge questions about the energy ties between Europe and Russia. CREDIT:AP

As the invasion entered its sixth day, Russia had launched more than 400 missiles on Ukrainian targets so far but did not control any major cities or have complete control of the skies over Ukraine.

The International Energy Agency’s 31 member countries agreed Tuesday to release 60 million barrels of oil from their strategic reserves — half of that from the United States — “to send a strong message to oil markets” that supplies won’t fall short after the Russian invasion of Ukraine.

The board of the Paris-based IEA made the decision at an extraordinary meeting of energy ministers chaired by US Energy Secretary Jennifer Granholm. She said in a statement that US President Joe Biden approved a commitment of 30 million barrels and that the U.S. is ready to “take additional measures” if needed.

A Donegal TD has expressed concern with the Health service coping under the strain of the surge in winter virus...

In addition to flu and the corona virus, bacterial infections are now rampant. The number of respiratory diseases has been well...

Shakespeare did his finest work under quarantine, I keep hearing. I wonder how the Bard would regard today’s “craft hour”...

The number of antibodies present in the nasal fluid is reduced nine months after being infected with covid-19, while the...