Russian forces are shelling Europe’s largest nuclear plant in the battle for control of a crucial energy-producing city – and the power station is on fire.

Plant spokesman Andriy Tuz told Ukrainian television that shells were falling directly on the Zaporizhzhia plant and had set fire to one of the facility’s six reactors. That reactor is under renovation and not operating, but there is nuclear fuel inside, he said.

Firefighters cannot get near the fire because they are being shot at, Mr Tuz said.

A Ukrainian government official told The Associated Press that elevated levels of radiation were detected near the site of the plant, which provides about 25% of Ukraine’s power generation. The official spoke on condition of anonymity because the information has not yet been publicly released.

Mr Tuz said it is urgent to stop the fighting to put out the flames. 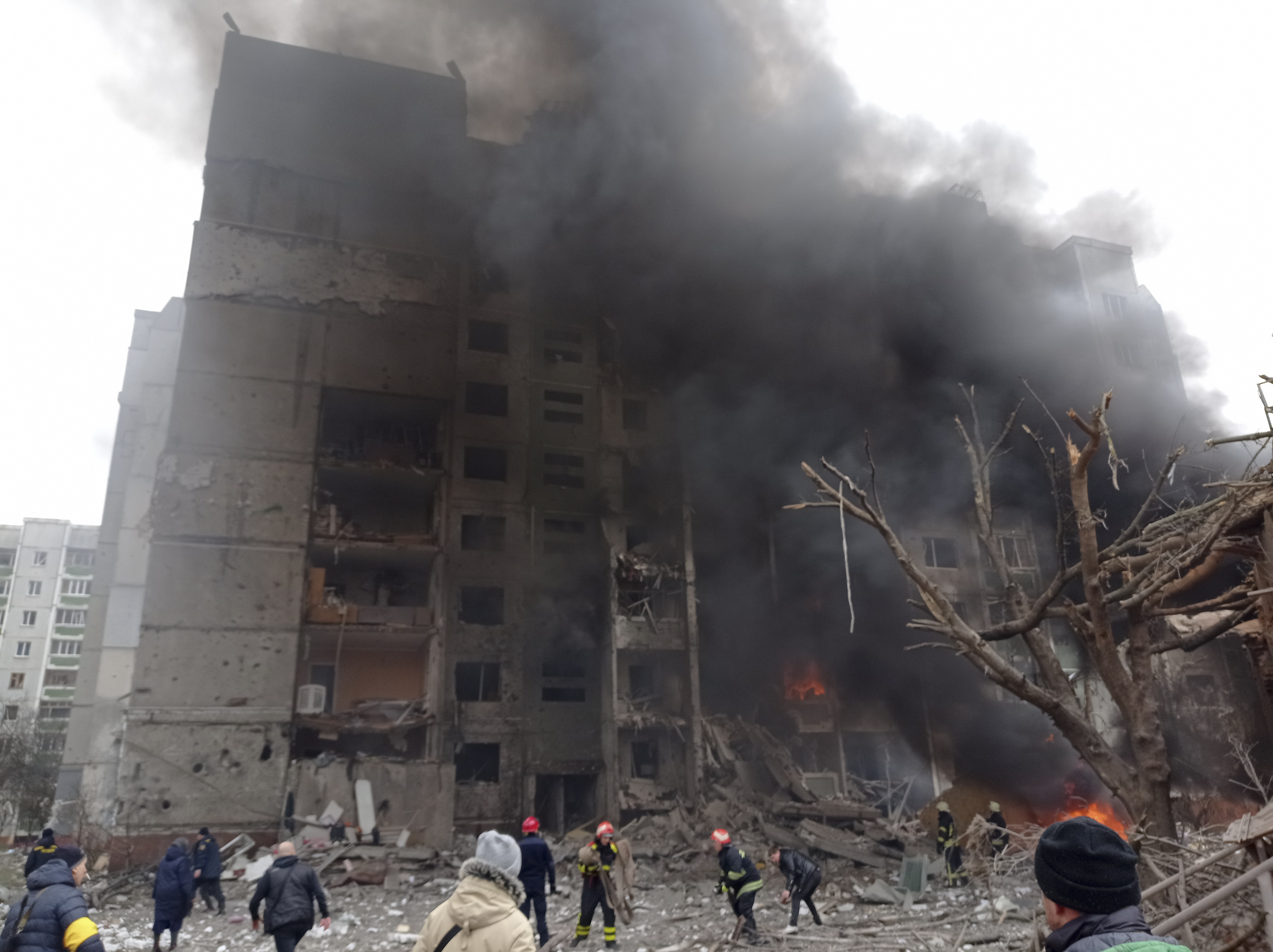 Firefighters work to extinguish a fire at a damaged city centre after a Russian air raid in Chernigiv, Ukraine (Dmytro Kumaka/AP)

The fighting at Enerhodar, a city on the Dnieper River, came as another round of talks between the two sides yielded a tentative agreement to set up safe corridors inside Ukraine to evacuate citizens and deliver humanitarian aid.

Elsewhere, Russian forces gained ground in their bid to cut off the country from the sea, as Ukrainian leaders called on citizens to rise up and wage guerrilla war against the invaders.

The mayor of Enerhodar said Ukrainian forces were battling Russian troops on the city’s outskirts.

Dmytro Orlov urged residents not to leave their homes.

Moscow’s advance on Ukraine’s capital in the north has apparently stalled over the past few days, with a huge armoured column outside Kyiv at a standstill.

And stiffer than expected resistance from the outmanned, outgunned Ukrainians has staved off the swift victory that Russia may have expected. 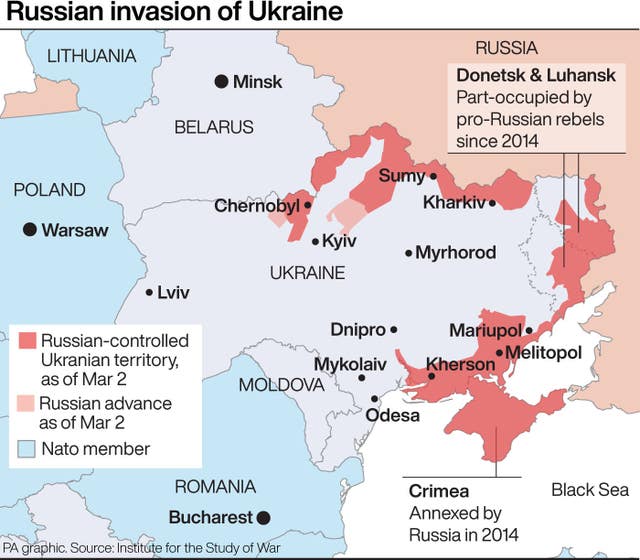 But the Russian forces have brought their superior firepower to bear in the past few days, launching missile and artillery attacks on civilian areas and making significant gains in the south as part of an effort to sever the country’s connection to the Black and Azov seas.

Cutting Ukraine’s access to the coastline would deal a crippling blow to the country’s economy and allow Russia to build a land corridor stretching from its border, across Crimea, which has been occupied by Russia since 2014, and all the way west to Romania.

The Russians announced the capture of Kherson, and local Ukrainian officials confirmed that forces have taken over local government headquarters in the vital Black Sea port of 280,000, making it the first major city to fall since the invasion began a week ago.

Heavy fighting continued on the outskirts of another strategic port, Mariupol, on the Azov Sea, plunging it into darkness, isolation and fear. Electricity and phone service were largely down, and homes and shops faced food and water shortages.

Without phone connections, medics did not know where to take the wounded. 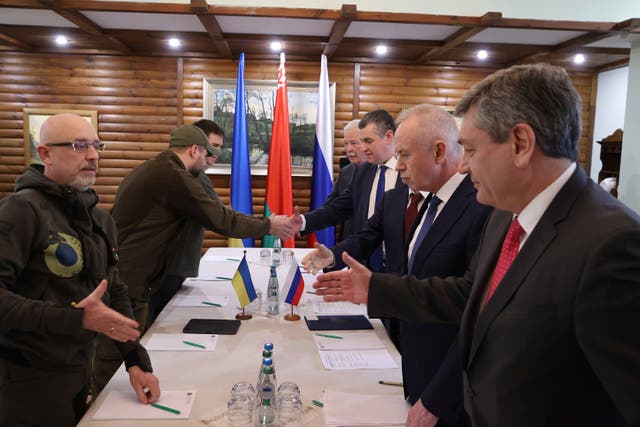 A second round of talks between Ukrainian and Russian delegations were concluded in neighbouring Belarus.

Vladimir Medinsky, Russian president Vladimir Putin’s adviser who led the Russian delegation in the talks in Belarus near the Polish border, said the parties’ “positions are absolutely clear, they are written down point by point”, including issues related to a political settlement of the conflict.

He added without elaboration that “mutual understanding was found on part of them”.

Both parties confirmed a third round of talks would be held soon.

Mr Putin has long contended that Ukraine’s turn toward the West is a threat to Moscow, an argument he used to justify the invasion.

Mr Putin told French President Emmanuel Macron that he was determined to press on with his attack “until the end”, according to an official in the French president’s office.

Mr Macron admitted his efforts to broker peace had not yet borne fruit, saying in a tweet: “I spoke to President Putin this morning.

“He refuses to stop his attacks on Ukraine at this point.

“It is vital to maintain dialogue to avoid human tragedy.

“I will continue my efforts and contacts.

“We must avoid the worst.” 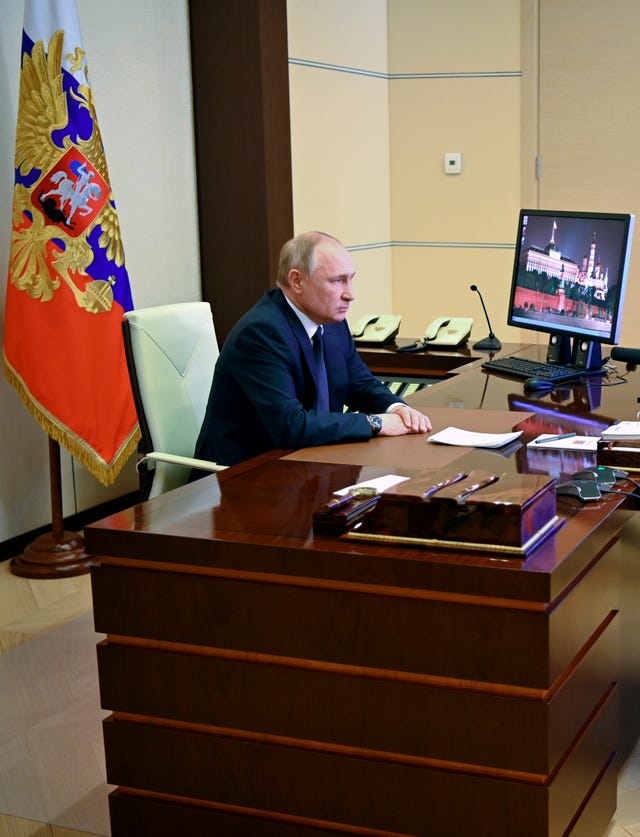 Despite a profusion of evidence of civilian casualties and destruction of civilian infrastructure by the Russian military, Mr Putin also called accusations that his military had attacked residential areas part of “an anti-Russian disinformation campaign” and insisted that Russia uses “only precision weapons to exclusively destroy military infrastructure”.

Ukrainians still in the country faced another grim day.

In Kyiv, snow gave way to a cold, grey drizzle as long lines formed outside the few pharmacies and bakeries that remain open.

New shelling was reported in the northern city of Chernihiv, where emergency officials said at least 22 civilians had been killed in a Russian bombardment of a residential area.

They warned that the number of casualties could grow as rescuers search the debris.

The mayor said he was struggling to organise safe passage for civilians.

Families with children fled via muddy and snowy roads in the eastern region of Donetsk, while military strikes on the village of Yakovlivka near the eastern city of Kharkiv destroyed 30 homes, leaving three dead and seven injured, and rescuers pulled 10 people from the ruins, according to emergency authorities.

Ukrainian authorities called on the people to wage guerrilla warfare against Mr Putin’s forces by cutting down trees, erecting barricades in the cities and attacking enemy columns from the rear.

“Total resistance. … This is our Ukrainian trump card and this is what we can do best in the world,” Ukrainian presidential aide Oleksiy Arestovich said in a video message, recalling guerrilla actions in Nazi-occupied Ukraine during the Second World War.

In just seven days of fighting, more than 2% of Ukraine’s population has been forced out of the country, according to the tally the UN refugee agency released to The Associated Press.

A Donegal TD has expressed concern with the Health service coping under the strain of the surge in winter virus...

In addition to flu and the corona virus, bacterial infections are now rampant. The number of respiratory diseases has been well...

Shakespeare did his finest work under quarantine, I keep hearing. I wonder how the Bard would regard today’s “craft hour”...

The number of antibodies present in the nasal fluid is reduced nine months after being infected with covid-19, while the...