The Los Angeles Angels’ free fall from having one of the best records in the American League to a 12-game losing streak cost Joe Maddon his job Tuesday.

General manager Perry Minasian recommended making the move to owner Arte Moreno, then drove to Maddon’s house to give him the news.

Third base coach Phil Nevin will be the interim manager for the rest of the season, beginning Tuesday night when the Angels (27-29) host Boston. 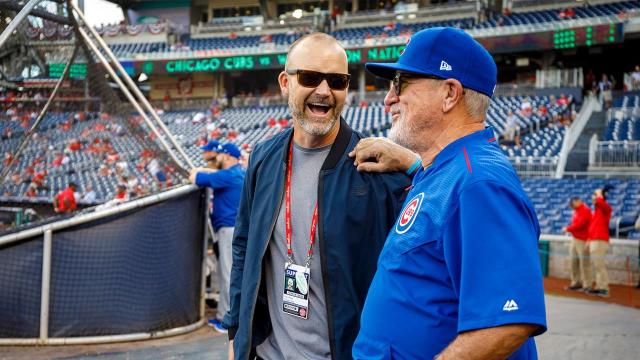 “Looking at the last couple of days is really when I started thinking about making a change. And I’m trying not to make emotional decisions. I’ll be honest, I’ve been emotional the past couple of days. There have been some really tough losses,” Minasian said.

The 68-year-old Maddon went 130-148 with the Angels, who hired him before the coronavirus-shortened 2020 season for his self-described dream job. Maddon spent three decades of his career as a player and coach for the Angels before going on to an impressive managerial career that has included three Manager of the Year awards.

The Angels were beaten 1-0 in Maddon’s final game by the Red Sox and journeyman starter Michael Wacha, who threw a three-hitter against the Halos’ star-studded lineup Monday night. Los Angeles closed a seven-game East road trip Sunday with a 9-7 loss in Philadelphia after rookie Bryson Stott hit a game-winning, three-run homer with two outs in the ninth inning. The Angels were leading 6-2 in the eighth inning before Bryce Harper tied it on a grand slam.

“The last two weeks have been really tough. There hasn’t been one phase of the game where we’ve been good,” Minasian said.

Los Angeles’ offense, which was among the majors’ best in the first six weeks, has scored only 35 runs during its 12-game losing streak with a minus-43 run differential. The Halos’ pitching staff has devolved into the ineffectiveness that has plagued the franchise’s last several seasons, posting an AL-worst 6.31 ERA during the streak.

AL MVPs Mike Trout and Shohei Ohtani have struggled. Trout has only one hit in his last 28 at-bats while Ohtani is batting .180 (7 for 39) during the losing streak.

“It’s tough when you lose a manager or anyone in general who you build relationships with,” Trout said. “It ultimately comes down to, we have to go out there and play together. Everyone has to be held accountable, myself included. Players have to go out and perform.”

After finishing with losing records in Maddon’s first two seasons, the Angels were off to a strong 27-17 start this year before their current losing streak began. They are one loss shy of tying the longest skid in franchise history, and the slump has dropped them 8 1/2 games behind Houston for the AL West lead after being in first place on May 15.

“Obviously this is not all Joe’s fault. Players are, myself, in part to blame, because I was underperforming,” Ohtani said through an interpreter. “I just want to say thank you to Joe. I appreciate everything he’s done for me.”

Ohtani flourished under Maddon, who prioritized unleashing the Japanese two-way star’s talents on both sides of the ball. Maddon worked with Ohtani to figure out a workload that allowed him to shine as a hitter and a pitcher.

Moreno’s big-budget club has finished with six consecutive losing records in the longest active skid in the majors despite a roster headlined by Trout and Ohtani, who have both never won a playoff game.

The Angels’ seven-year playoff drought is also tied for the third-longest in baseball, yet they appeared to be well on their way to making the expanded field this fall before their confounding current skid.

Yet, Los Angeles still has a chance. It began the day only 1 1/2 games out of the final AL playoff spot.

The streak forced a dismal end to what Maddon hoped would be a storybook conclusion to his career back in the Pennsylvania native’s adopted home in Orange County. The genial, talkative bench boss excelled as a manager for nine seasons in Tampa Bay and five more with the Chicago Cubs, who famously ended their 108-year World Series championship drought during his tenure in 2016.

Maddon’s first season was only 60 games due to the coronavirus pandemic. Last year Trout played only 36 games before being sidelined in May with a season-ending calf injury.

Nevin is the Angels’ third manager in just over four seasons since Moreno cut ties with Mike Scioscia, who ran the Angels’ dugout for 19 years and won their only World Series championship. Maddon was Scioscia’s bench coach during that title season in 2002.

The Halos dismissed manager Brad Ausmus after just one terrible season in late 2019, and the move appeared to be made because Maddon had just come on the market after parting ways with the Cubs. Moreno then fired general manager Billy Eppler and hired Minasian after the 2020 season, but the first-time GM appeared to get along splendidly with Maddon.

The 51-year-old Nevin is the first Orange County native to manage the Angels. He played 12 major league seasons for six teams, including the Angels in 1998. He has never been a manager above the Triple-A level, but he spent four seasons as the New York Yankees’ third base coach before joining Maddon’s staff this season.

“I think he’ll do great,” Yankees manager Aaron Boone said. “I think he’s such a great baseball guy. He’s certainly paid his dues. He’s been probably close to landing a job a few different times where he’s probably been that runner-up, but he’s poured a lot into this game.”

Nevin said he talked to Maddon earlier Tuesday, which helped put him at ease.

“Joe was great and told me to just take this and run with it and be the person I am, which I plan to do. That made it easier on me because it has been an emotional day,” Nevin said. “There’s ups and downs compounded with how the last 12 days have gone.

“There is some excitement, but I know what today’s narrative looks like. But this is about that group in that room.”

Maddon is the second manager to be fired this season. Philadelphia’s Joe Girardi was dismissed last week, and the Phillies promptly swept the Angels.

President Emmanuel Macron intervened to ask France's footballers to greet fans after their defeat in the World Cup final, leading...

Millions of jubilant fans turned out Tuesday to welcome home Argentina's World Cup winners led by Lionel Messi, but most were...

Millions of Argentines who crammed the streets of Buenos Aires to celebrate an unforgettable moment with Lionel Messi and his World Cup...

Tens of thousands of Moroccans thronged the capital on Tuesday to welcome home their national football team, the first Arab...

Argentina's World Cup winners were forced to abandon their open-top bus parade around Buenos Aires due to the massive crowds...

"Muchachos, we can dream again..." the hit song that accompanied Argentina on their conquest of the 2022 World Cup has found...