A Northern California woman who claimed she was kidnapped for 22 days five years ago was arrested and charged with faking her abduction.

On Thursday prosecutors charged Sherri Papini, 39, for lying to federal agents about being kidnapped and defrauding the state’s victim compensation board of $30,000.

Papini was found on Thanksgiving Day in 2016 after weeks of searching in California and several nearby states, with bindings on her body and injuries including a broken nose and a ‘brand’ on her right shoulder.

She had been reported missing Nov. 2. She told authorities at the time that she had been kidnapped at gunpoint by two Hispanic women, even providing descriptions to an FBI sketch artist.

Prosecutors charged Sherri Papini, 39, (pictured) for lying to federal agents about being kidnapped and defrauding the state’s victim compensation board of $30,000 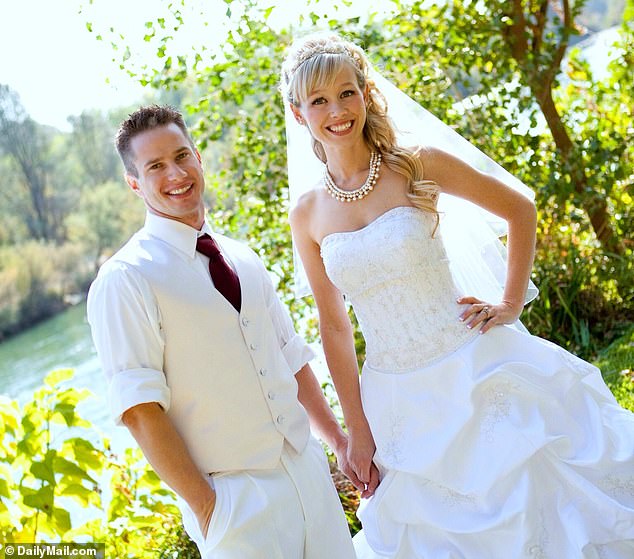 On the day Papini went missing, her husband Keith said he had first become concerned about her whereabouts when she stopped answering her phone

In reality, authorities said, she was staying with a former boyfriend nearly 600 miles away from her home in Orange County, in Southern California, and hurt herself to back up her false statements.

‘When a young mother went missing in broad daylight, a community was filled with fear and concern,’ U.S. Attorney Phillip Talbert said in a statement. ‘Ultimately, the investigation revealed that there was no kidnapping and that time and resources that could have been used to investigate actual crime, protect the community, and provide resources to victims were wasted.’

Papini does not yet have an attorney because she was just arrested, Talbert’s office said. Her first court appearance has not yet been set.

She was still lying about the kidnapping in August 2020 when she was interviewed by a federal agent and a Shasta County sheriff´s detective, the charges allege. They showed her evidence indicating she had not been abducted and warned her that it was a crime to lie to a federal agent.

But she still made false statements, the charges allege.

Papini does not yet have an attorney because she was just arrested. She faces a mail fraud charge related to the reimbursement requests that carries a penalty of up to 20 year

Papini claims that two Hispanic women driving an SUV abducted her but covered their faces. These sketches were released of them almost a year after she went missing

Papini said she was taken at the intersection of Sunrise Drive and Old Oregon Highway while on a jog. She’s described her captors as two Hispanic women who drove a dark SUV
The area where Sherri Papini was found near the I-5 freeway outside of Yolo, California

She also was reimbursed more than $30,000 by the California Victim´s Compensation Board based on the false story, the charges said. They included money for visits to her therapist and for the ambulance ride to the hospital after she surfaced near Sacramento.

She faces a mail fraud charge related to the reimbursement requests that carries a penalty of up to 20 years in prison, while lying to a federal officer has a maximum five-year sentence.

‘Everyone involved in this investigation had one common goal: to find the truth about what happened on Nov. 2, 2016, with Sherri Papini and who was responsible,’ said Shasta County Sheriff Michael Johnson.

That 22-day search and five-year investigation not only cost money and time, he said, ‘but caused the general public to be fearful of their own safety, a fear that they should not have had to endure.’

The mother-of-two, dubbed a ‘supermom’ by her sister Sheila Koester, 36, disappeared while out jogging on November 2, 2016.

On the day she went missing, her husband Keith said he had first become concerned about her whereabouts when she stopped answering her phone.

When he discovered she hadn’t picked the kids up from daycare, he flew into full blown panic.

‘I couldn’t find her, so I called the day care to see what time she picked up the kids. The kids were never picked up so I got freaked out, I hit the Find My iPhone app thing,’ he said. ‘I found her phone; it’s got like hair ripped out of it, like, in the headphones.’

Pictured: Papini and Keith in their wedding photo. Keith launched an appeal – a GoFundMe account raising cash to pay for the search which eventually raised close to $50,000

Her phone was discovered a mile away at the intersection of Sunrise Drive and Old Oregon Highway – neatly placed on the ground and with the headphones tidily wrapped around it.

Keith, who said at the time that his wife would never leave him or their children voluntarily, also launched an appeal – a GoFundMe account raising cash to pay for the search which eventually raised close to $50,000.

After being found three weeks later, with her hair hacked off and branded with a threatening message, Papini claimed she had been kidnapped by two Hispanic women who could not be identified because they constantly covered their faces.

Papini said the women had been driving a dark-colored SUV with ‘a large rear side window’ at the time of the kidnapping but has so far been unable to give details of the make and model.

However, police also revealed that male DNA that did not belong to husband Keith was found on her clothing and said she had been texting another man before her disappearance.

Cops investigating the kidnapping had discovered Papini’s texts and tracked down the man in Detroit, Michigan on November 9 – a week after she disappeared.

Further skepticism about why she disappeared emerged after it was revealed she had previously run away as a teenager.

And according to the Sacramento Bee, uncovered documents from 13 years ago outlined how Papini’s mother, Loretta Graeff, called police asking for help after her daughter was allegedly self-harming and trying to blame the wounds on her.

The incident report, filed in December 2003, is just two lines long and reads: ‘RP states her 21y/o daughter that was living with her was harming herself and blaming it on the RP.

‘RP states female is coming back to live with them and she wants advice.’

The newspaper also found two other incidents involving Papini, where her father and sister both claimed she damaged their property.

In 2000, Richard Graeff said his daughter ‘burglarized his residence,’ before Sheila Koester, ‘alleged her back door had been kicked in and she believed Papini was the suspect’, the Bee reported.

In retrospect, ‘we are relieved that the community is not endangered by unknown, violent kidnappers,’ said Sean Ragan, special agent in charge of the FBI’s Sacramento Field Office.

Next post Rod Marsh passes away at age of 74